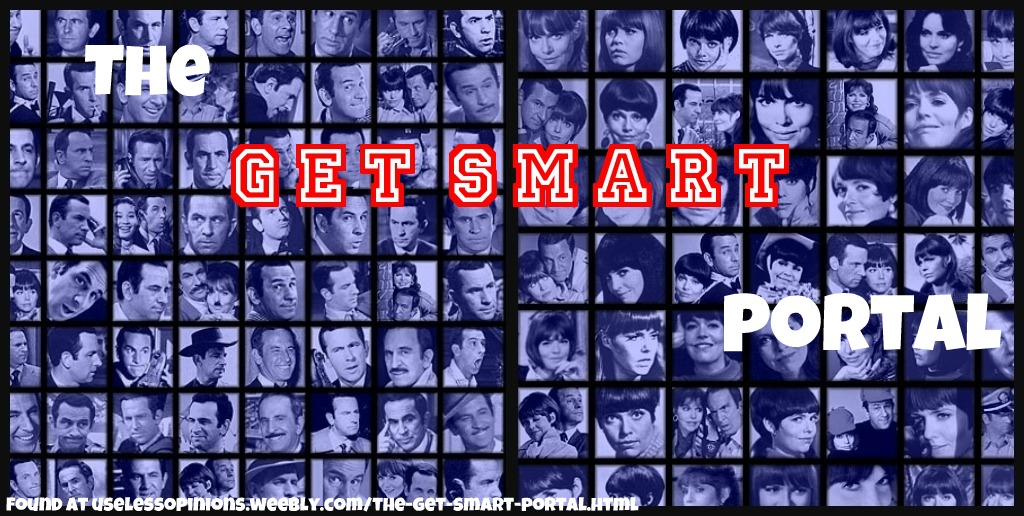 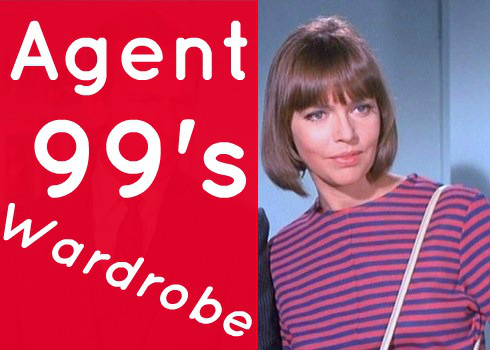 99 wore quite a lot of interesting things, from sedate, normal outfits to wild, extreme ones. I'm going through and documenting them as I can. I'll be listing them with the episodes they appear in below. I did take all these screen shots by the way, sorry if any are fuzzy.
I use Owely while playing the DVD in full screen mode on my laptop, before you ask how. Feel free to copy any you need, but please don't say you took them yourself. No need to ask me or credit me though as long as you don't credit anyone else.

In season one, 99 wore rather sedate outfits, and wore her hair in a short bob. She wore a lot of little berets.

In the pilot episode, the only black and white, 99 wears a chauffeur's uniform.

In Diplomat's Daughter she wore a maroon dress and skirt with a petal like collar. 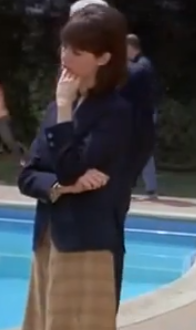 In School Days, she wore a butterscotch gingham skirt and matching color (but no print) shirt with a tie and suit jacket. 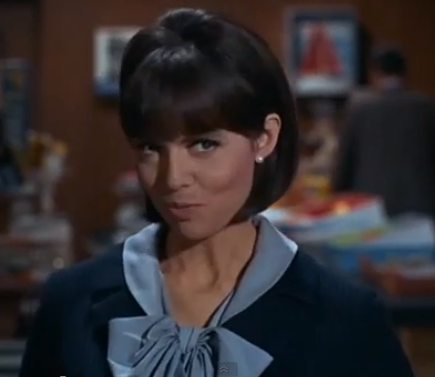 A navy blue dress with a light blue bow collar was worn in Our Man In Toy Land. 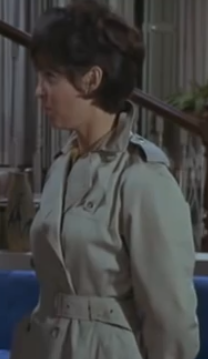 We only see her in a generic trench coat in Now You See Him, Now You Don't. In some of the close ups you can see the edges of a dark brown collar sticking out but that's it. 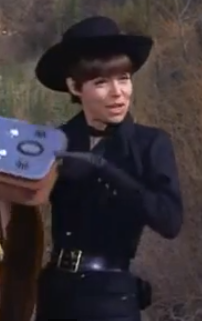 She's in her cowgirl clothes for Redskins 4, Washington 3. 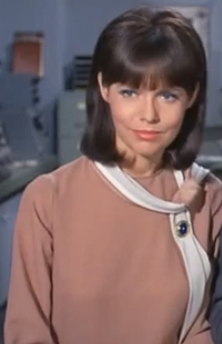 In KAOS in CONTROL she wore this salmon colored dress with the fancy white collar. 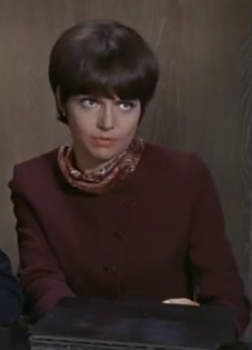 A dark maroon shirt and skirt with a matching printed scarf for Satan Place. 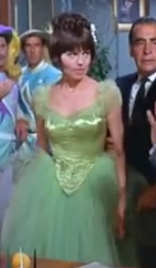 In Our Man In Leotards 99, had a lovely green ballerina sort of dress (as her cover was a dancer).
For Too Many Chiefs, she was first seen in a very dark blue trench coat. Once she took it off, she revealed a diamond checked red and black turtle neck with a dark blue skirt about the same color as her coat. Also a reddish brown gun belt. 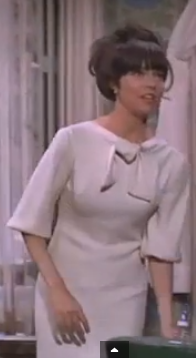 99 had a darling white party dress in My Nephew The Spy (which was ruined but Max's clean freak Aunt Bertha, by the way).
In Aboard The Orient Express (One of my Favorites, the Johnny Carson cameo scene is hilarious) 99 wore three different outfits (yeah three). The first was an orange turtle next tucked into the waste of a slightly more orange corduroy skirt with pockets. The second was a disguise for when they really were aboard the Orient Express- a brown trench coat and dress with a grey fur hat and a sort of black veil around her face. The final is a teal dress with a little beret. 99 actually wears a lot of little berets in the first season. Like a lot... 6 or 7.

In The Weekend Vampire she wears a brown and tan dress. She is later seen in red silk pajamas and later seen (also) in a brown trench coat (screenshots coming soon)
For Double Agent she wears FOUR different ones. The first is a blue turtleneck and a black skirt, the second a beige turtleneck and a maroon skirt, the fourth a maroon skirt and shirt with a beige collar and matching little beret (again) and the final a grey sweater and skirt with a blue collar.
In The Dead Spy Scrawls, she wears a whopping SIX different outfits. The first is a disguise, including a cape and veil. The second is a pink turtleneck and a black skirt. The third is a gray dress with a beige shirt under it and a bow that matches along with a fancy necklace along her collar, and white gloves. The third is a lavender and white striped shirt and black skirt. Fourth is a purple turtleneck and a white jumpsuit over it. The final one is a red blouse and a black skirt.
In The Dead Spy Scrawls she is first seen in a brown trench coat and a little red beret (little beret #3) but when she later takes off the coat we see her in a red dress with a turtleneck collar. I presume it's the same red collar we saw sticking out of her trench coat; but now she traded the coat for a corduroy double breasted jacket.  Finally she wears a gray sweater dress.

In Back To The Old Drawing Board, a favorite of mine (it's when Hymie gets introduced) she wears ANOTHER maroon dress. This time with a fur collar.

In All In The Mind she wears a very "chick" as they say teal dress with a blue ribbon waist and collar. 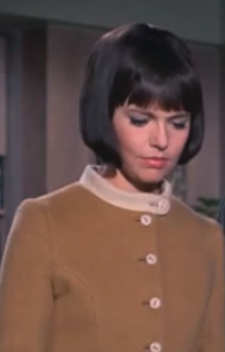 In Dear Diary she wears what could be the cousin of her attire in Weekend Vampire: a brown dress with beige trim. But it's not exactly the same; just very close. 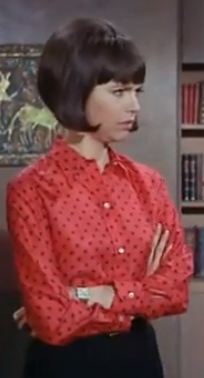 A black skirt and a red and black polka dot shirt was in Smart, The Assassin.
In I'm Only Human she wore a gold-ish turtle neck with a broach in the middle, and later on she changes to a sort of a serviceman's uniform.
Powered by