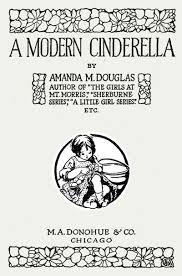 I have no clue where this came from. All I know is it was there and I read it because that is what I do.
Thrilling right? -_-
3 stars is what she gets. It wasn't great and wasn't bad. There are always lots of books you really liked but you didn't really love them or hate them because they were just....books. That's what three starts means to me. And that's what this gets. I mean yeah it's good and I was very interested in it while reading it but I probably won't remember it next year.
Anyhoo, In this book it was back when a girl could be "indentured" I guess is the word to work for someone if they were orphans. So this girl called Marilla, is one of those girls, and she is a nurse girl for the Bordons. But while she likes it there, there is a boy called Jack there who is a "holy terror" as Bridget the Irish cook says and then the babies, Violet and Pansy who are heavy as a two-ton tessie (I said that, they didn't) and while the Bordons' don't think she does much. she really works much harder then they will know and she has a heat... something. Some kind of medical condition appears and she meets a lady whom she calls her "Fairy Godmother" in the process of trying to heal. The Bordons' are in a rush to get her back and so she has to return to her work against the doctor's will, and it isn't long before death hits the family and Marilla's rushed recovery catches up with her.
In the end she gets what she wants- a happy family where she isn't the nurse. But If I said who or how it would give it all away so I won't do that. :p

I still am unsure what genre this is, I have just about decided to hang it up and conclude that it hasn't one. Because it's got maybe one romance scene, two mystery scenes, an adventury scene, and other wise (it just struck me that adventury is not a word but I don't give a darn 'cause it is now) it's a lot of nothing. It is some pretty entertaining nothing, mind you, but I just can't place the genre. Everywhere online claims it's a romance but trust me- it is far from that.

Chapters: 14
Original Date: Unknown (because my copy is missing that page. -_- )
Final Verdict: I would recommend you read this.
Return To The Book Reviews Page
Powered by