The Girl From Montana by Grace Livingston Hill 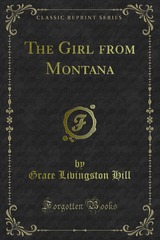 This book is something I got in a library book sale and I love it. I rarely give anything 5 stars unless it's on my top list, and this one almost made it but I think 4 stars more than covers it.

In The Girl From Montana, a girl... from Montana... (big shocker right?) is running away from a man, whose home state I have no idea about (sorry, like you even wanted to know anyway...). That man is none other than the very man who killed her brother, and now he wants to force her to be his wife.
To make the long story short and not spoil the story, she fakes him out and gets him to leave, and makes a run for it on her now dead brother's horse.
The brother is dead, not the horse.
Obviously.
Just thought that could use some clarifying.
Anyway. She runs away in the night and later accidentally meets up with a man in the middle of nowhere, a man who was separated from his hunting group and is starving in the middle of- I already said that. Anywho, now they travel across the country together in a sort of an action adventure typed story. In the end he is called away from her, even though he hates to leave her because he feels it is his duty to protect her from the awful man currently chasing her, because s serious family emergency has occurred and he must go home to Philadelphia at once.
But in the end.... I can't tell you or you wouldn't need to read it. :p

That just skims the surface of the book.

I am not one for romance but this has a touch of it. mostly the book is an adventure book, with the littlest hint of romance in a couple places, but luckily nothing major. (major romance + me = no go)

I was unable to find an image of the book's original cover, but the image above is of a reprint.
My copy has a 60's library binding.
60's book cover artists sucked.
The girl is described with having this kind of... simple beauty.
Not how she was drawn on this book cover.
She looks like a cross between Wendy from Bob The Builder and a clay model of Mona Lisa that melted.
Pretty grotesque, in other words.
And we won;t even go into the the guy on the cover.....

Chapters: 17
Original Date: 1917
Final Verdict: I would recommend you read this.
Return To The Book Reviews Page
Powered by