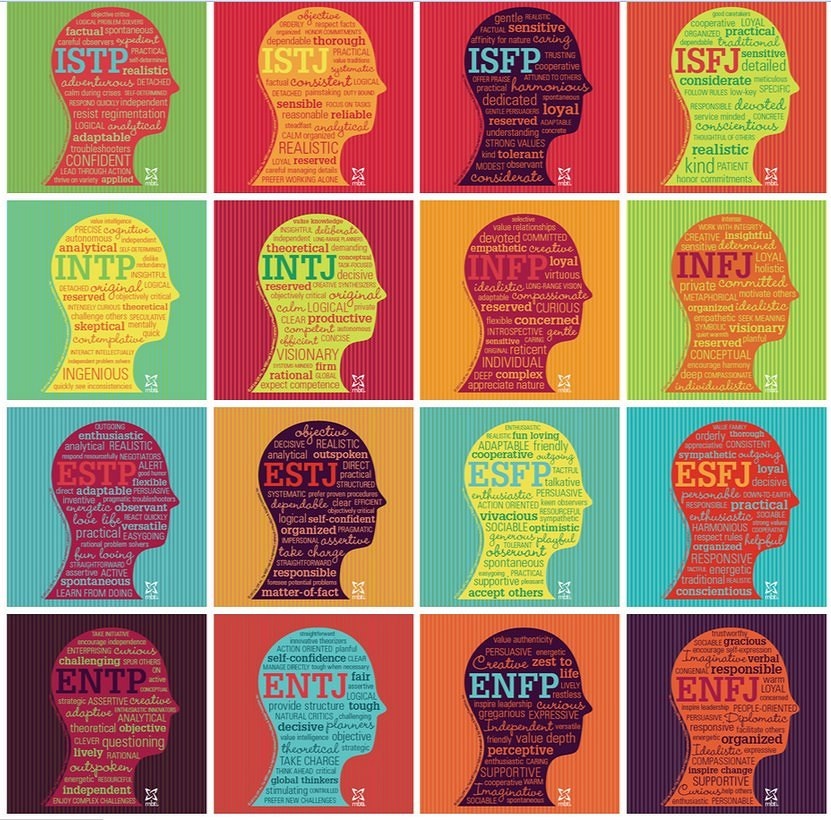 MBTI is an amazing tool, a science of sorts, to learn about people.
It recognizes certain traits that you have and assigns them to your four letter type- but it's best if I explain it one thing at a time.

There are eight different preferences. Each type is four letters, and each letter can be one of two choices. The options are E/I, S/N, T/F, and P/J. A more detailed description:

Your first preference is either this:

Extraverted (E)
Expressive, outgoing, prefer group activities, eager to speak their minds, more comfortable when around other people than when alone, get energized by social interaction.

Introverted (I)
Reserved, listen carefully, prefer solitary activities, more comfortable when alone than when around other people, get exhausted by social interaction.

Your second preference is either this:

Intuitive (N)
Introspective, rely on their imagination, absorbed in ideas, focus on what might happen.

Sensing (S)
Observant, rely on their senses, absorbed in practical matters, focus on what has happened.

Your third preference is either this:

Your fourth and final preference is either this:

Credit 16 personalities for descriptions.
Now maybe that gives you a better idea of what I'm talking about?

Seems pretty straightforward, right?
Well, now let me complicate it for you.
'Cause that's how I roll. :D

Okay, MBTI is based off the theories of a famous man named Carl Jung.
If you combine Jung's eight functions with MBTI's selective use of only four, you get something called Shadow Functions.

The basic idea is that... let's say you are an INTP like me. Since INTPs are Thinking and thinkers apply logic to everything, and logic cannot very well be applied to feelings, thinkers have a history of shoving the whole feeling department into a box on the darkest corner of their mind's attic and trying to pretend it doesn't exist (which never works entirely I might add).
If you were solely a thinker, then you wouldn't have any feelings at all, which would be horrible and would in general make you totally imbalanced. That's why we have Shadow Functions. INTPs also have S and F in them, but they're in shadow functions.
Your shadow functions are kind of "subconscious". You can't "decide" to put them to use, like your main preferences. Rather they come into action when stimulated by some outside source. You can't really on your own try to develop a shadow function; rather something outside of YOU must occur that "stimulates" it, thus developing it the older you are. You don't have very good control over them.
That is not to say that you cannot train yourself to control them; usually the older you get the more blurred the lines of your shadow functions become and you begin to learn to use your shadow unctions.

So, if you're not confused yet, let's take another step.

You have a dominant (which will be one of your preferences; one of the letters of your type), an Auxiliary, a Tertiary, and an Inferior. The inferior is the one you use LEAST. It is always a Shadow function.

You may notice the addition of an extra word to each function....
All of your preferences, shadow or not, are either Extraverted or Introverted, If they are extroverted they use the function in relation to other people, and if it's introverted, they use the function in relation to themselves. Functions are abbreviated with an I or an E after the main letter; i.e. introverted Sensing is usually written Si, and extroverted sensing is usually written Se, and so on with the others.

INTPs have Introverted Sensing as a Tertiary function. They use it to organize data and take in information in an organized fashion. Si helps them bring up memories and see them in a surprisingly vivid way; it puts some value on tradition, and it relies on past experience.
Se on the other hand gives one a more hands off approach, It relates to the here and the now. It projects to other people and vividly takes in the world around it, details about people, colors, sounds, etc, rapidly organizing them into neat little grids on information in one's mind.

INTPs have Fe. It is extroverted feeling. INTPs don't often think a lot or in great depth about feelings, but when we do, we usually consider others first. They often don't consider their own. Fe doesn't like conflict and strives to do whatever need be to keep the peace. It worries about someone else's feelings first. It likes to "extrovert" its feelings, i.e. it likes to spread them out to the public.
Those with Fi on the other hand (introverted feeling) are more interested in their own feelings. They often do not consider other's feelings. They don't worry about conflict that much and these people tend to keep these feelings to themselves rather than spread them around.

There's the basics of MBTI.
If you have a question, ask in the comments!