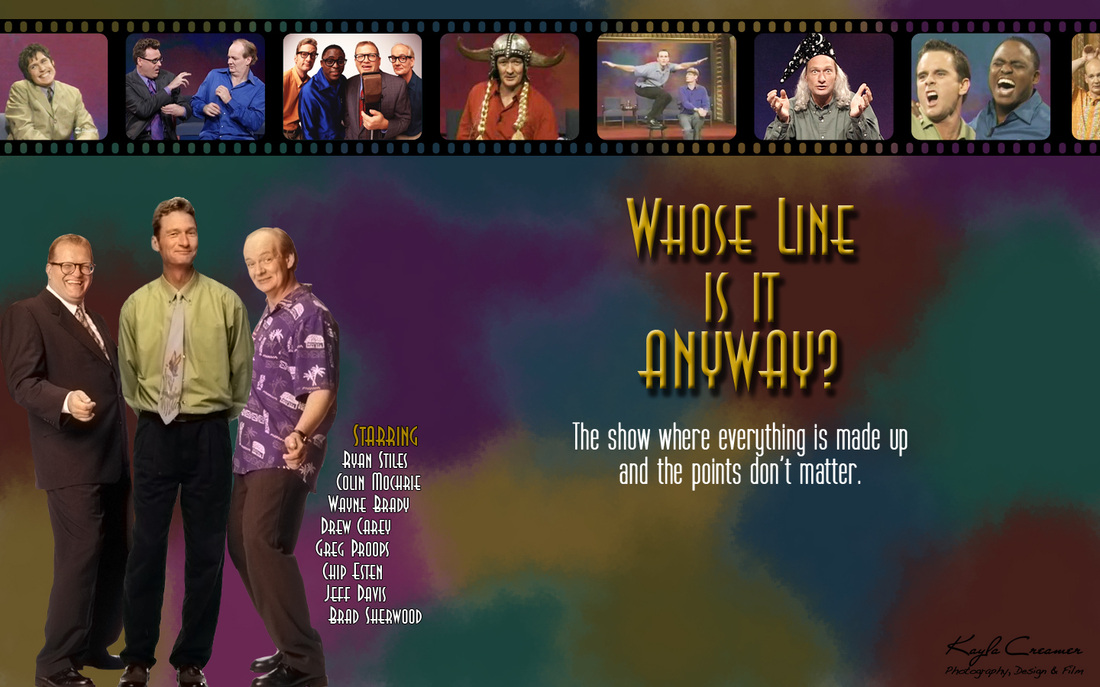 Whose Line Is It Anyway?

It's origins were a radio show based in England. It was created by Dan Patterson and Mark Leveson, and the only connected participant to the TV versions was the host, Clive Anderson, who also hosted the UK version of the show. After only eight radio episodes, Channel Four bough Whose Line Is It Anyway from BBC and put it on the air, ordering 13 episodes for the first season, more than any other first season had ordered before. There were ten seasons of the UK Whose Line Is It Anyway, and there really were no regulars on the show, until the seventh and eighth seasons, when Colin Mochrie and Ryan Stiles were added as regulars. Colin Mochrie auditioned three times for the UK version and was turned down, but Ryan Stiles was accepted in the seventh season, and fought with the directors and producers until Mochrie was added in the eighth season.
In the late 1990s, Drew Carey caught wind of the show. Drew Carey worked with the regular of the former UK series [which ended in '98] Ryan Stiles on his sitcom, The Drew Carey Show. Carey argued with ABC, and managed to get then to [reluctantly] run some test episodes. They ended up forming the US version of Whose Line Is It Anyway, which ran for eight seasons, or 260 episodes. [I think]. On the US version there WERE regulars- Ryan Stiles was one of the first and had to argue with the producers and directors to get Mochrie on the show as a regular. At first they were the only two regulars with the two other spots rotating, but soon Wayne Brady became the third regular with the fourth the rotating one, and even so the fourth one was usually one of so many- Brad Sherwood, Chip Esten, and Greg Proops just to name a few.

Four performers in the studio work together to provide side-splittingly funny improv comedy based on the suggestions of the directors, the audience, the host, and each other. They have different "games" in which there are different "rules", and a few are played each show, performed for the live audience, and then the number of the games played in the taping is edited down (for length) and aired for the people at home, watching TV.
The four performers sat in four chairs in a row at the back of the set with a couple pitchers of water on stands with glasses. There was a long, two-step drop into a lower portion of the floor where all the performing was done. The host sat behind a desk facing the performing area and an L shaped audience around was around everything- part behind the host and the rest in front of the performing area. There as a raised are on all four sides of the performing area, for the purpose of games with rotating participants.
There were never any rehearsals, no planning, and not one performer gad any clue what they would be asked to do before they were told on the spot, and it really was true improv.
They would play games that had been made up for the show, and each game had certain rules and plots. For example, the game "number of words"- usually for all four performers, in this game they are given a scene to act out, but each performer is assigned a different umber of words which they must use exactly when speaking. In "Quick Change" three of four performers act out their given scene, while either the fourth performer of the host stands on the raised part off the performing area, beside the desk, with a microphone and says "change" every now and then, and whoever last spoke must replace whatever they said with a different line as many times as "change" is said.
The host controls a buzzer which is used to end each scene or the subsections of the many rapid fire games. They also control a door bell used in some games and read the cards that the directors and producers have written out the scenes and such on. The host chooses any audience participants, such as in the US version's "Sound Effects" where Colin and Ryan act out the given scene and two selected audience participants provide sound effects for them. [usually comical as the sound effects are often sketchy and used at comedic twists in the plot of the performers].
The host also does any audience asking. Some games require the suggestions of the audience. Some are given before the show and written down on the host's cards, but others are yelled out on the spot and the host picks the ones he likes best. For example in the game "Superheros" they must ask the audience for a super hero name, and when one is chosen must ask for a crisis for said superhero to deal with, all before starting the game.
The game is modeled as a bit of a spoof of the average game show- points are given out after each scene by the host, although it is made apparent by the host and performers that "Whose Line Is It Anyway is the show where everything's made up and the points don't matter!" The host gives them out however they like, for example, in one US episode Ryan Stiles said something in a Hoedown game that may have been a little sketchy and Drew Carey awarded him "1000 points, for giving the censor something to think about." Sometimes if the performers would do something like knock over the water pitchers (happened a few times) or make fun of the host he would subtract points. At the end of every episode a "winner" [or joint winners] were chosen. On the UK version, the "price of winning" as Clive Anderson called it, was to read the credits as they rolled across the screen, while doing a scene that he has just made up. In the US version, it was for the host to join the performers in a game, while the winner got to sit behind the desk and act as the host, and the run the buzzer and the cards and the audience business and other things. In the US version the reading of the credits was made up by the host but had nothing to do with winning, and was after the winning-prize game. Unlike the UK version the show's theme music played while the credits rolled so the reading had to be all visual.

Personally I don't get into the UK version until the eighth season when Colin Mochrie and Ryan Stiles were added for each episode, because I really have trouble relating to the humor with no one from my side of the world. Plus, I find both their humor pretty hilarious. :p
For now this is a single page dedicated to the show, but maybe, if I think of enough things to write, it will be divided like the other portal-style pages.
Enjoy!

What Games Did They Play?

I'll tell you about the games played on WLIIA. I will mark which version(s) they were played on.
Thank you to Wikipedia for giving me the idea to attempt to organize them!
(Because that's not in my nature).